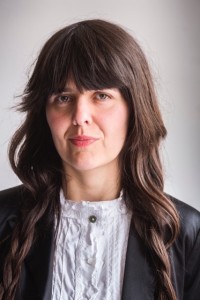 The twelfth person in our series of introductions to performers taking part in International Poetry ReIncarnation at the Roundhouse in Camden on 30th May 2015 is the Spanish singer/songwriter and artist Vanessa Vie.

From 1993 she committed to the practice & study of the Visual Arts and, in 1995, one of her drawings was used  for a Hard Rock Cafe Barcelona t-shirts limited edition. Before long, music, performing arts and poetry would become the centre of her activity. Alberto Arango from the National Cuban Opera, and jazz maestro Don Kemonah, who had moved from London to Spain, were among her various influential teachers.

In 1997 she co-formed, with folk and classical double bass player Ignacio Pozo, her first pop-rock band Ithaca, which dissolved in 2000. In the same year Vanessa resolved to live & work in London, largely in consequence of reading the works of William Blake.

In 2005, with her ex-husband, rock musician Ian Montlake, Vanessa co-formed the alternative-rock band Rockatron, which dissolved in 2009.

In 2012 Vanessa met poet, artist and iconoclast Michael Horovitz, whose encouragement, inspiration, and active partnership go on feeding her muse. The duo’s renditions of their own, Lorca’s, Blake’s, Emily Dickinson’s and others’ lyrics and poetry have become a staple of Michael’s Jazz Poetry SuperJams.