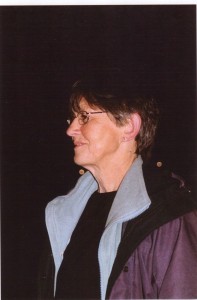 The second person in our series of introductions to performers taking part in International Poetry ReIncarnation at the Roundhouse in Camden on 30th May 2015 is the poet and botanist Libby Houston.

Libby first performed for Michael Horovitz’s Live New Departures at the 1961 Edinburgh Festival. Since then she has read her work world-wide, appearing last at the Roundhouse in 1967. BBC Schools Radio commissioned her to create a series of much-loved storytelling poems for children. Cover of Darkness (Slow Dancer Press, 1999) included most of her work of the 20th century. She was married to the late Mal Dean, artist, cartoonist & free jazz trumpeter (d. 1974), and she is currently working as a botanist in Bristol, specialising in plants on cliffs. She also has a species of Whitebeam named after, one of the many she discovered on the Avon Gorge in Bristol.