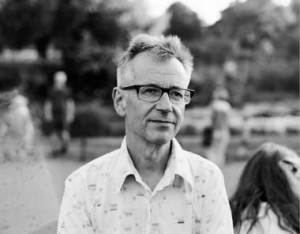 The tenth person in our series of introductions to performers taking part in International Poetry ReIncarnation at the Roundhouse in Camden on 30th May 2015 is the spectacular John Hegley.

John Hegley first performed at The Roundhouse in 1978, singing Elizabethan songs with Interaction colleagues, led by Phil Ryder, who was their Community Cameo Will Shakespeare.  These days, this contributor to the evening sings about love and potatoes and continues creative interaction with youngsters, frequently inspired by the poetry of Adrian Mitchell, who was one of the original Albert Hall communicants.

Poetry in Britain was somewhat in the doldrums in the 1950s, as far as it being a public art went. It tended to sit in small rooms in universities and libraries and speak to and of itself. With my father’s generation – people like Adrian Mitchell, Christopher Logue, Pete Brown – poetry picked itself up and went running around the country talking to people who didn’t expect poetry to come leaping out of hedgerows at them. It went charging up to the Edinburgh Festival and touring through towns and cities with musicians and actors and playwrights in tow. Poetry began to listen, and to sing out in different rhythms. It offered up a party where only drier forms of symposia had appeared available before. END_OF_DOCUMENT_TOKEN_TO_BE_REPLACED