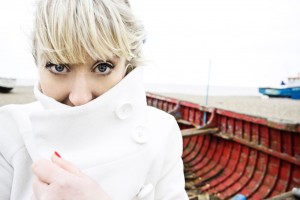 The sixth person in our series of introductions to performers taking part in International Poetry ReIncarnation at the Roundhouse in Camden on 30th May 2015 is the singer/songwriter Gwyneth Herbert.

Gwyneth Herbert is a strikingly original performer, award-winning composer and lyricist, and versatile musical adventurer who continues to redefine and challenge expectations. With one foot in the jazz world and the other somewhere in the future, she has released six albums to date on both major and independent labels, including the first Blue Note UK release for 30 years.

Since the huge success of 2013’s large-scale cross-artform project “The Sea Cabinet” (the result of an Aldeburgh Music residency), Herbert has seen her musical co-written with celebrated playwright Diane Samuels open at the Southwark Playhouse, and, with artist Mel Brimfield, has built a Fun Palace in Stratford Station, and a musical film installation about sculptors Henry Moore and Barbara Hepworth in Sheffield. She’s also spent a month in Kenya collecting lullabies, sharing songs in slum schools, and staging multi-tribe storytelling happenings under the Mombasa stars.

“If Hans Eisler had been a woman and written with Ray Davies, he might have come up with something like this” – Independent on Sunday

“A remarkably gifted talent” – The Guardian