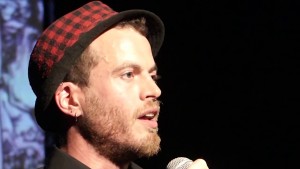 The twenty third person in our series of introductions to performers taking part in International Poetry ReIncarnation at the Roundhouse in Camden on 30th May 2015 is the poet, activist, and musician Pete the Temp.

Mr The Temp is the former Hammer & Tongue National Poetry Slam Champion. He has been featured on BBC Newsnight, Radio 4 and World Service as a poet, musician, educator and activist.  In 2014 he did a national tour of his one man stage show Pete (the Temp) vs Climate Change in which he single handedly defeats climate change using only his mouth. He is the 2015 Glastonbury Festival official website poet in residence.

Pete the Temp will be discussing Radical Poetics and whether words can ever really change the world with Pete Brown and Cecilia Knapp at the first afternoon ReIncarnation panel. To book tickets, click here.