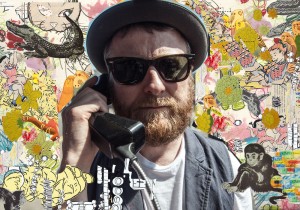 The eleventh person in our series of introductions to performers taking part in International Poetry ReIncarnation at the Roundhouse in Camden on 30th May 2015 is poet and promoter extraordinaire Daniel Cockrill.

Daniel Cockrill, who will be your genial host for the night of ReIncarnation, has been saying words out loud since 1996. He is co-founder of BANG SAID THE GUN, ‘the poetry event for people who don’t like poetry’ and PAGEMATCH, a show which smashes together the Razzamatazz of Wrestlemania with all your favourite spoken word artists.

Daniel’s words have appeared in books, newspapers, magazines, on gallery walls, at major festivals, on stage, radio and television. He is also a regular contributor to the Poetry Takeaway, ‘the world’s first mobile poetry emporium’.

He has two full collections of work entitled Pie and Papier-Mâché and Sellotaping Rain To My Cheek and is co-editor of the Bang Said The Gun Anthology Mud Wrestling With Words published by Burning Eye Books.

Poetry in Britain was somewhat in the doldrums in the 1950s, as far as it being a public art went. It tended to sit in small rooms in universities and libraries and speak to and of itself. With my father’s generation – people like Adrian Mitchell, Christopher Logue, Pete Brown – poetry picked itself up and went running around the country talking to people who didn’t expect poetry to come leaping out of hedgerows at them. It went charging up to the Edinburgh Festival and touring through towns and cities with musicians and actors and playwrights in tow. Poetry began to listen, and to sing out in different rhythms. It offered up a party where only drier forms of symposia had appeared available before. END_OF_DOCUMENT_TOKEN_TO_BE_REPLACED