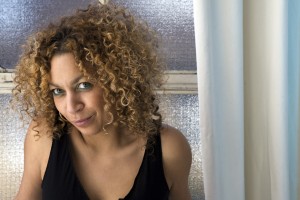 The nineteenth person in our series of introductions to performers taking part in International Poetry ReIncarnation at the Roundhouse in Camden on 30th May 2015 is the irrepressible Salena Godden.

Salena Godden has been described as ‘The doyenne of the spoken word scene’ (Ian McMillan, BBC Radio 3’s The Verb);  ‘The Mae West madam of the salon’ (The Sunday Times) and as ‘everything the Daily Mail is terrified of’ (Kerrang! Magazine). Her pamphlet of poems, Under the Pier, was published by Nasty Little Press in 2011. An anthology of poetry Fishing In The Aftermath, Poems 1994  – 2014 was published in July 2014 with Burning Eye Books.  Her literary childhood memoir Springfield Road was successfully crowdfunded and published in October 2014 by Unbound Books.

She’s known as The General of The Book Club Boutique, London’s louchest literary salon. The Book Club Boutique currently resides at Vout O’Reenee’s in East London. Salena is the lead singer and lyricist of SaltPeter, alongside composer Peter Coyte.  She appears on BBC radio as a guest on various shows including Woman’s Hour, Click, From Fact To Fiction, The Verb, Saturday Live and Loose Ends. She recently featured on NPR’s ‘All Things Considered’ in the US.  Salena Godden works with award winning radio producer Rebecca Maxted, writing and presenting BBC radio documentaries. Try A Little Tenderness – The Lost Legacy of Little Miss Cornshucks was made in Chicago and aired on BBC Radio 4 and the BBC World Service throughout 2014. This followed the success of Stir it Up! – 50 Years of Writing Jamaica which was also for BBC Radio 4. 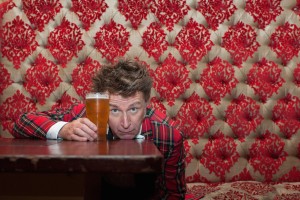 The eighth person in our series of introductions to performers taking part in International Poetry ReIncarnation at the Roundhouse in Camden on 30th May 2015 is the astonishing Elvis McGonagall.

Stand-up poet, armchair revolutionary and recumbent rocker, Elvis McGonagall is the sole resident of The Graceland Caravan Park where he scribbles verse whilst drinking Scotch, listening to Johnny Cash and throwing heavy objects at his portable telly.

The second series of Elvis’ sitcom “Elvis McGonagall Takes A Look On The Bright Side” is scheduled to be broadcast in August 2015 on BBC Radio 4 where he appears regularly (“Saturday Live”, the “Today Programme”, “Arthur Smith’s Balham Bash” and many others, as well as writing and presenting documentaries).

He’s also appeared on BBC1’s “The One Show” (his jacket clashed with the lime green sofa), BBC2’s “The Culture Show” and their coverage of the World Snooker Championships’ final of 2008, Channel 4’s “Random Acts”, BBC Radio 2’s breakfast show and “It’s Grimm Up North” and on the World Service.

Elvis is the 2006 World Slam Champion, the compere of the Blue Suede Sporran Club and performs and comperes at literary and music festivals, comedy clubs and dodgy dives up and down the country and abroad.

A live recording of his show One Man And His Doggerel is available on Laughing Stock Records and a short collection of his work Mostly Dreich is published by Nasty Little Press.

“….funny, angry and tightly written….McGonagall combines anger, polish and carefully crafted verse in a way which recalls John Cooper Clarke….If the word ‘poetry’ is putting you off, get over it” (**** Susan Mansfield, The Scotsman) – full review here: